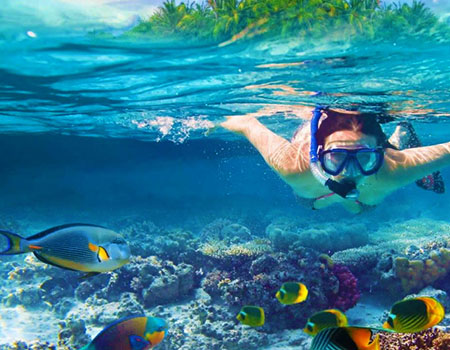 Magnetic Island has fringing coral reef and many shipwrecks that are abundant in sea life.

Some of the best places to explore while snorkeling and diving on Magnetic Island are found at Nelly, Geoffrey, Alma, Arthur and Florence Bays.

The Island has two marked snorkel trails, one in Nelly Bay and another in Geoffrey Bay. Snorkel Trail maps can be purchased at various locations around Magnetic Island for a $5 donation to the upkeep and maintenance of the trails and other reef areas on Magnetic Island. These handy Swim Cards mark the species of fish and coral that you are likely to see at each location, including 100kg aqua-cultured giant clams.

Geoffrey Bay's Snorkel Trail is close to the wreck of the Moltke as well as a WW2 propeller and engine block, with the notes on the snorkel trail maps directing you to the right areas. Leading out to the trail you will find a large amount of reef and fish living around the rocky areas.

Snorkeling gear can be hired or purchased from the fishing and leisure hire shops. Dive gear can also be hired from dive shops